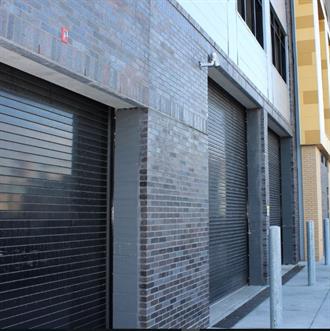 STC is a commonly used acronym across the construction industry that stands for Sound Transmission Class. Generally speaking, STC is a standard that provides a rating of how well a building partition reduces internal airborne sound. Simply stated, the higher the STC the better. There is also a standard called OITC, which stands for Outdoor – Indoor Transmission Class. OITC is a similar standard that is used to indicate the rate of transmission of sound between outdoor and indoor spaces in a structure. STC and OITC relate to many aspects of the construction industry, but we will be focusing on STC and understanding the role that it plays with in the rolling door industry.

How is STC measured on a rolling door?

The standards to test for STC have been established by the American Society for Testing and Materials (ASTM) using procedure E90. ASTM E90 is generally performed in a controlled laboratory environment although it is not completely uncommon to have a field test performed. A controlled laboratory test is much more consistent and reliable than a test done in the field. When testing in the field the environment and surroundings will cause the test results to vary when multiple tests are performed.

The testing is performed by exposing the door to 16 standard frequencies from 125 Hz to 4000 Hz. The transmission loss values are then plotted on a sound pressure level graph and the resulting curve is compared to a standard reference contour. Acoustical engineers then fit these values with the coordinating Transmission Loss Curve to determine an STC rating. 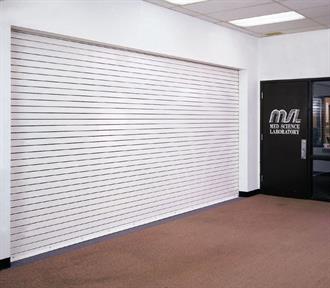 Are all STC values equal?

Not at all! When seeking an STC rating for a specific product, it is very important to request the test report. This will help you understand the testing parameters that were used to achieve that number. For example, you will often find rolling door manufacturers only posting the STC of the curtain – Don’t be fooled! Not only is this number higher than a full assembly STC, it is irrelevant. Testing the curtain by its self does not show a real life situation. Do you ever install just a curtain? No, when a rolling door is being installed there is also a header, guides and bottom bar. These components are required in the installation process and are also known to be the most vulnerable when it comes to sound and air passage or the rolling door seal. This means that testing a full assembly will give you a lower STC rating, but it is also more accurate to a real life situation. Just because the STC rating is listed as being tested on the full assembly that does not mean that you should not request the test report. The values that are being provided may not be based on a standard construction or the construction that you plan to use. For example, if the guides of the full assembly test specimen are encased in the drywall this will increase the STC rating that this assembly will achieve. You want to make sure that you are receiving an STC rating that is using a configuration that is exact to the one that you will be using on your project. Otherwise it is not valid.

How can I achieve a higher STC on my rolling door? 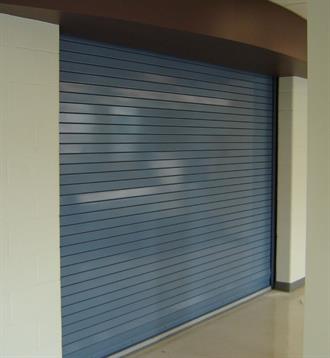 There are two ways to achieve a higher STC rating on your rolling door. As mentioned previously, you can use a unique construction around the door opening or rolling door seal. For example, you can encase the guides in drywall or recess the coil. This will allow for less sound passage in these areas which will produce a higher STC rating. The second option is to have a super imposed installation. This means that two insulated curtains will be installed next to each other to further buffer the passage of sound. The super imposed method is not very common and could be costly but will assist you in meeting a higher STC rating.

Fortunately, rolling doors are made to order which allows you to customize the perfect door to achieve the STC rating that is needed for your specific project.

Cookson continues to lead in innovations in roll up door, security gate and closure products. To inquire how Cookson’s experts and customer service can help you with your next roll up door project, call 1-800-294-4358