What is Garage Door Wind Load? 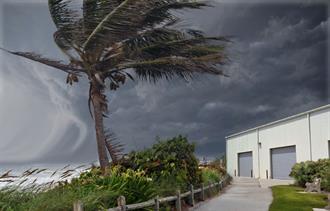 In advance of hurricane season, there’s often a lot of questions about hurricane proof doors and how to protect buildings from damage.  It’s no surprise that rolling doors are often areas of great concern, as any opening or hole in the building is a natural pressure point that must be able to withstand great wind forces in a hurricane.  That’s where the term “wind load” comes in, and it comes in two flavors – “Design” and “Test.”  Let’s take a closer look.

When hurricane garage doors are closed, all loads are transferred to the overhead door guides (the channels at the sides of the door) and wall angles (how the guides are attached to the wall).  One must worry about two kinds of loads here – “dead” and “live”.  Dead load is the total rolling door hang weight and is constant.  Live load is wind pressure forces and is not constant. 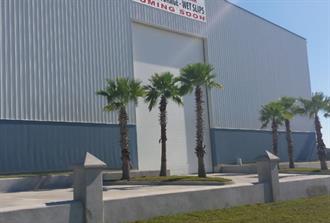 While generally, overhead rolling doors are supported by a guide assembly attached to the jamb construction and no additional header supports are required to keep the coiling door up, there are some areas of critical support in dead vs. live load situations.  The critical wall fasteners in a dead load are above the rolling door opening (think of a clothesline with clothes pins holding a sheet at the top – that’s your top fasteners).  Live load’s most critical wall fasteners are within the opening height (think of a chain link fence – the areas where the chain link meet the posts are the side fasteners).

Think of live forces as the gusts of wind during a hurricane.  It’s not hard to see that the live load forces can greatly exceed the dead load force.  Wind load is the amount of live load that hurricane garage doors can handle.

So, knowing that high wind speeds are seriously damaging in a hurricane, you might be tempted to simply specify maximum wind speed to make sure your hurricane proof doors are up to the task.  But that’s not enough.  There are actually 10 other factors that play a role in determining Design Wind Load – a much more accurate measure of how a commercial garage door will be able to withstand a hurricane.  The 11 factors are as follows: 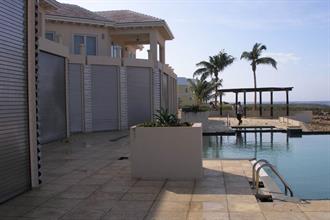 Clearly, the wind speed and the size of the overhead door are very important factors.  But changing just one of the other nine factors can radically change the required design wind load for your hurricane garage door.  These eleven wind load door factors give you the required pounds per square foot (psf) of a garage door – a much more accurate measure of how a rolling door will perform in windy situations.

It’s important to note that in this instance, were we’re talking about Design Wind Load, which is utilized in areas where wind conditions cause structural concern.  So what is Test Wind Load? 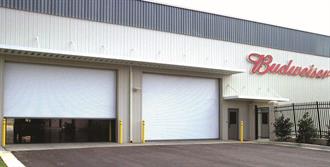 Basically, you want to beef up the guides and make sure the curtain won’t fly out of them in a hurricane situation.  But notice what you don’t see above – heavier gauge.  A common misconception is that wind load capacity will increase if heavier gauge door slats are specified.  A heavier door curtain gauge may actually make the windlocks less effective because it increases the dead load of the door, thereby exponentially increasing the live load of the overhead door (as we learned earlier) – all of which puts the door at a higher risk of blowing out. 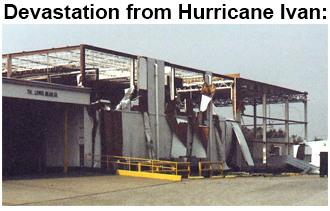 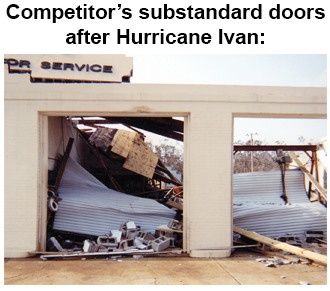 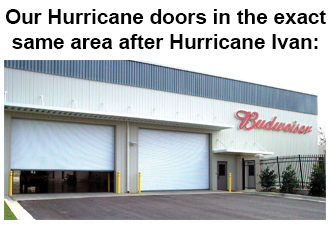